If we leave the Ides of March and possibly the choppy market moves behind, we will enter a particularly bullish period for stocks. In particular, the March OPEX created volatility ahead of the funds’ quarterly realignment before we often see rapid seasonal uptrends. I highlighted this on Twitter last week as I believed The March Dip Before the April Rip was spot on. For the past 10 years, the S&P 500 Index (SPX – 4,019.87) was positive by + 2.47% in April, by + 2.07% in the last 20 years and by + 1.39% in the last 50 years. If this is the first year of a newly elected president in their first term, it was + 1.11% positive, which goes back to the Ronald Reagan administration.

So far, “The March Dip Before the April Rip” plays perfectly, based on the last 10 years of seasonality. $ SPX $ SPY pic.twitter.com/R0xt1bDGgz

So my guess is that we’ve been working through at least a short-term constructive retreat, as we’ve seen many of the momentum names that drove the indices up earlier this year have historically been between 40% and 60% or more went back a few weeks. In addition, the S & P 500 SPDR ETF Trust (SPY – 400.61) has room for the big open interest call strike at 410 for the end of April which could be an area we will finally find resistance later in the month. So where do we look for alpha?

If you are looking for some technical permit to get into a bullish large cap tech trade that is recommended, I think it would be best if you are looking for resistance that I discussed last week to be taken out. According to the table below, note that the NDX is climbing back above some combination of its 40-day moving average, which marked the high point of last week. Additionally, the 13,000 and 13,037 levels, which are a 50% Fibonacci retracement of the recent closing highs and lows, remain significant.

Over the past few weeks we’ve been highlighting where you can potentially find cheap stock allocations as we’ve seen the decline in both areas Russell 2000 Index (RUT – 2,253.92) and Nasdaq 100 Index (NDX -13,329.52) moved in key levels. First, the RUT pulled back 10% from its highs and was roughly at the + 10% year-to-date level, where it found support throughout March and closed above the 20-day moving average around the shortened vacation week to finish last Thursday. Second, the NDX had only pulled back to regain the YTD breakeven level it had held for the past three weeks. However, Thursday’s spike exceeded technical resistance and allowed us to get long again as it was above its 40-day moving average. Additionally, this solidified the breakout above around the 13,000 level and the index broke above both the 50% and 61.8% Fibonacci retracement levels. 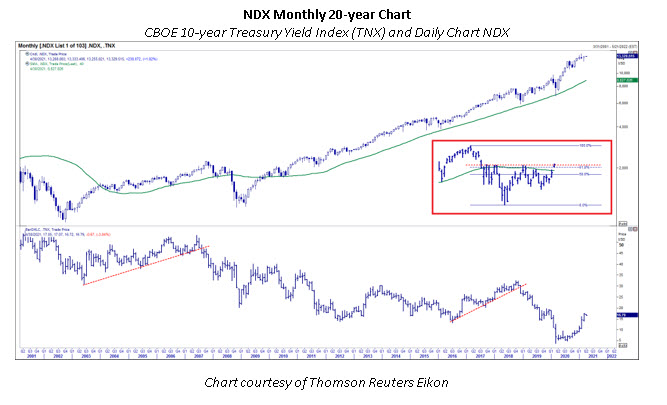 Additionally, experts have made a lot of ado about how interest rates have been holding up technology stocks lately. This is partly true, since when interest rates rise rapidly, technology stocks tend to stall, at least for a short time. Even so, these rapid rate hikes tend to balance out relatively quickly, and any consolidation in interest rates, even if it moves sideways, has been a signal for the technology to resume its longer-term trend. In addition, we have seen two significant periods when we have had a rising interest rate environment like this CBOE US 10-year Treasury Index (TNX – 17.27)Technology also continued to rise, which happened from 2003 to 2007 and from mid-2016 to 2018. 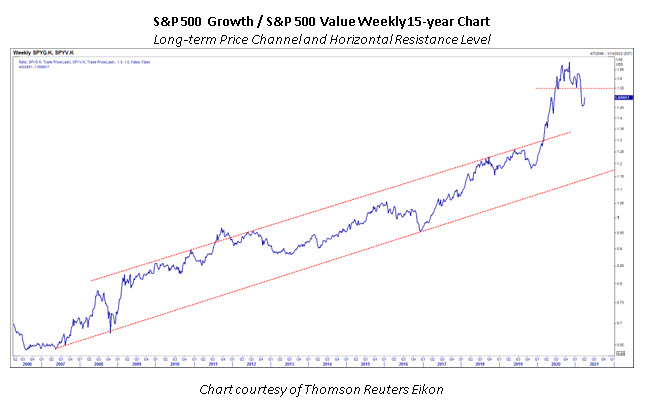 To summarize, let’s look at value versus growth using the relative ratio graph. Value trades have historically been short-lived, and growth has usually gained the upper hand. This might still be true, but it’s obvious that the growth trend has collapsed, at least in the medium term, if you look at the graph. I suspect that over the next month we will continue to see a small decline in growth to the collapse level towards resistance. What I’m taking away from this is that we can probably map both value and growth businesses, but at different time intervals. Growth deals should be done in a shorter timeframe, but we can still assign value ideas as they pull back and brace for another likely spike as our economy opens up further.

… For VIX futures options that expire in April, May and June and are open from the end of February, the open positions exceed the open positions. Such situations are rare. But historical events in the past preceded a bearish VIX. This time around, the VIX Open Interest gained traction over the Call Open Interest as the VIX hit its most recent high around its 252-day moving average.
The current open interest configuration for VIX futures could indicate that the VIX will drop below the 19-20 minimum level in the coming weeks or months.

We also saw them CBOE Volatility Index (VIX – 17.53) finally break under the 19-20 floor we discussed a few weeks ago. This happened much faster than expected, but it continues to support a bullish thesis as we try to get into a lower volatility environment that generally supports stocks. 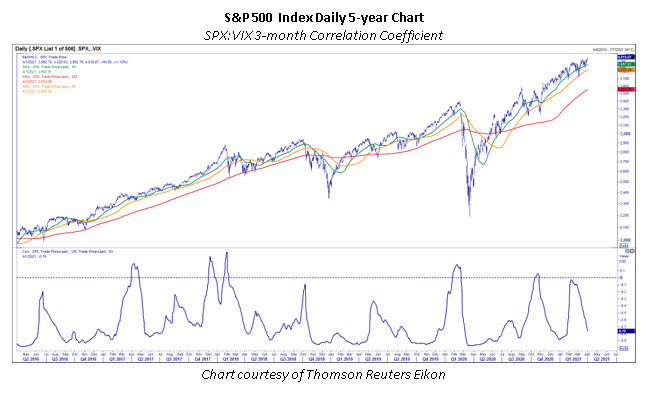 In addition, the SPX / VIX 3-month correlation decreased significantly. Another indication that we may be re-entering a lower volatility environment as this indicator has a fairly consistent ability to predict volatility and subsequent rallies in stocks after a rollover. When you think about the VIX leaving the high volatility environment, a caveat comes to mind. In the past, when we have been in a highly volatile environment like the tech bubble, the financial crisis of 2008, and now last year, we need to watch out for a false collapse. While only two previous samples offered no statistical significance, both found lows around 17 before exploding again, catching stock buyers off guard. So we will want to keep this core of information in mind so that we can adapt and act accordingly when past patterns reappear. 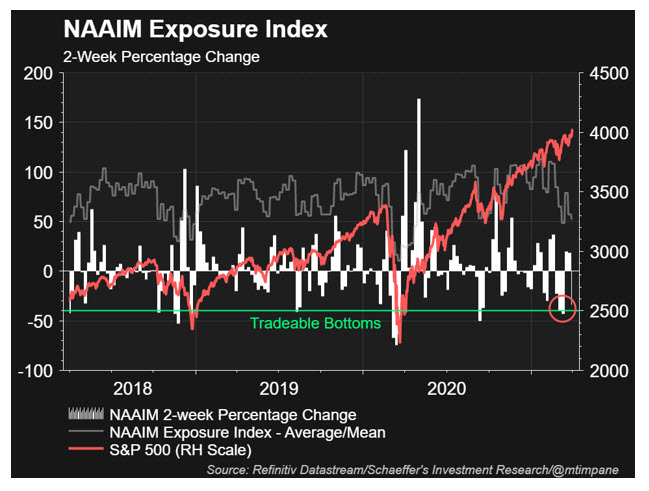 March certainly helped to reset the euphoric upward sentiment that plagued us at the beginning of the year. A few weeks ago, I pointed out on Twitter how we can use the percentage change in the NAAIM Exposure Index to look for short-term stock floors. In particular, I expect a -40% change in the index for 2 weeks to signal that we should be looking for a bottom in stocks within the next four weeks. While it isn’t the most specific timing tool, it does give us an idea of ​​when to look out for surrender lows in stocks.

The family office, Archegos Capital, which was used five to one in its holdings, blew up early last week. This, in turn, caused the prime brokers that the fund had wound up to quickly liquidate $ 80 billion worth of holdings, causing a little panic in the markets. This may very well have led us to an extreme surrender floor as many stocks were dramatically lower and may have prepared us for an environment where we can return to higher stock indices. Additionally, the NDX’s 10-day buy-to-open put / call ratio is at 0.56, which is again close to where we’ve seen the NDX rally and supports our thesis of the technical permission that we can be a long-large-cap technology one more time. 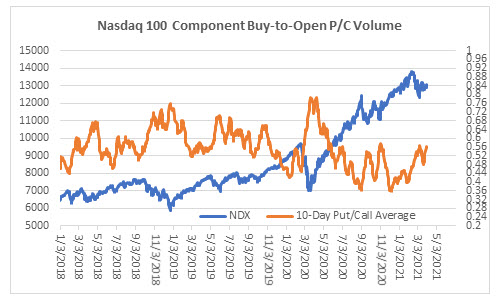 As we’ve noted over the past few weeks, we still think positioning towards small caps is the way to go, but we also see bullish potential for seedy tech names in the near future as we move into the seasonally bullish month April enter.