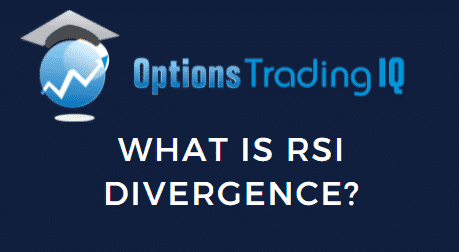 RSI divergence is a key technical pattern I’m looking for.

Today I’m going to show you how to recognize it and how to act on it.

The formula for the RSI indicator is derived based on the share price.

Therefore, most of the time the RSI goes up when prices go up.

When the price goes down, the RSI goes down.

Aside from being mathematically forced into a range of 0 to 100, the RSI should follow price action.

Occasionally we notice the subtle difference between the two that their movements are not entirely in sync.

When the RSI moves against the price, this is known as the RSI divergence.

We’re going to look at some graphs and examples to train your eyes to look for those little deviations.

By identifying such divergences (which can occur in both an uptrend and a downtrend), it can provide clues as to when the price may reverse.

Here is a classic example of RSI divergence on an uptrend.

We see that Crowdstrike (CRWD) is in an uptrend. 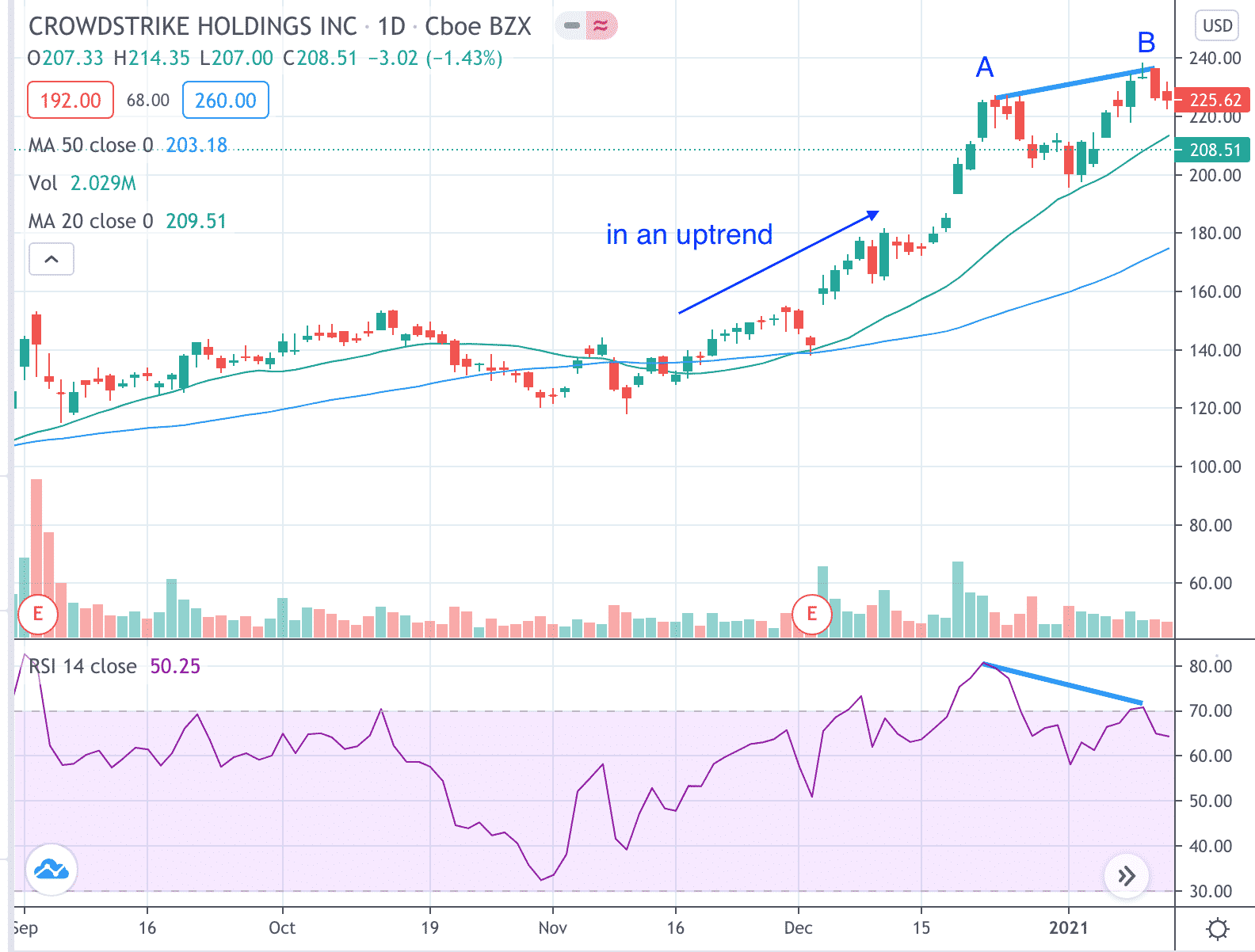 However, the RSI corresponding to these two points in time did not make a higher high.

In fact, it made a lower high.

The RSI is heading towards the price. This is known as RSI divergence.

Since the RSI is no longer tracking price, this suggests that the upward move is slowing, losing momentum and may turn around soon.

An investor could go short on January 14, 2021 (the red candle on the far right of the chart) and would have done well. 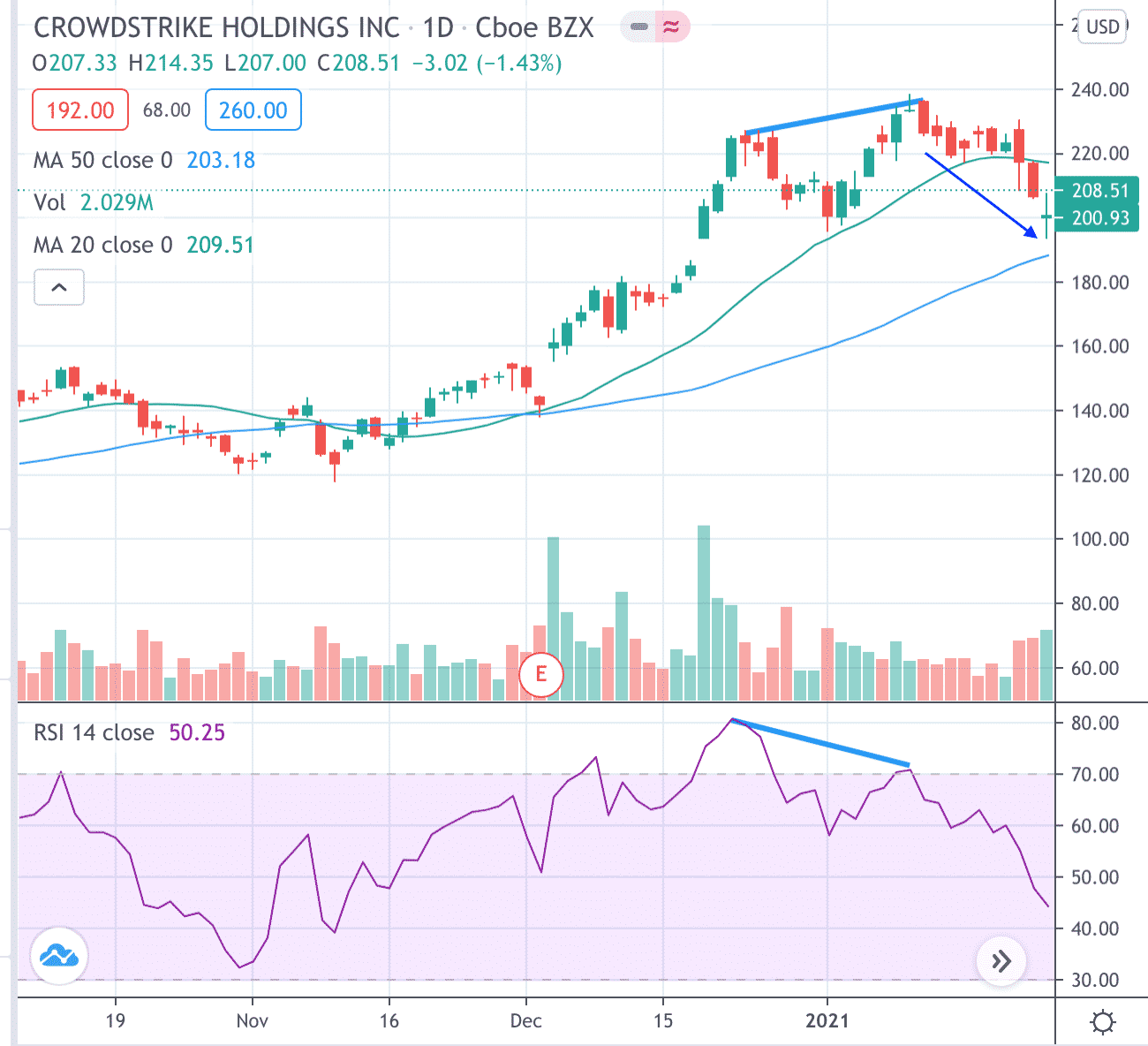 Note that this works best when observing the RSI divergence when the RSI is in the overbought state for at least one of the peaks.

We consider the RSI to be overbought when it is above 70.

Let’s move on to the CRWD chart. Price makes it to point C, which is a higher high than the previous high at B. 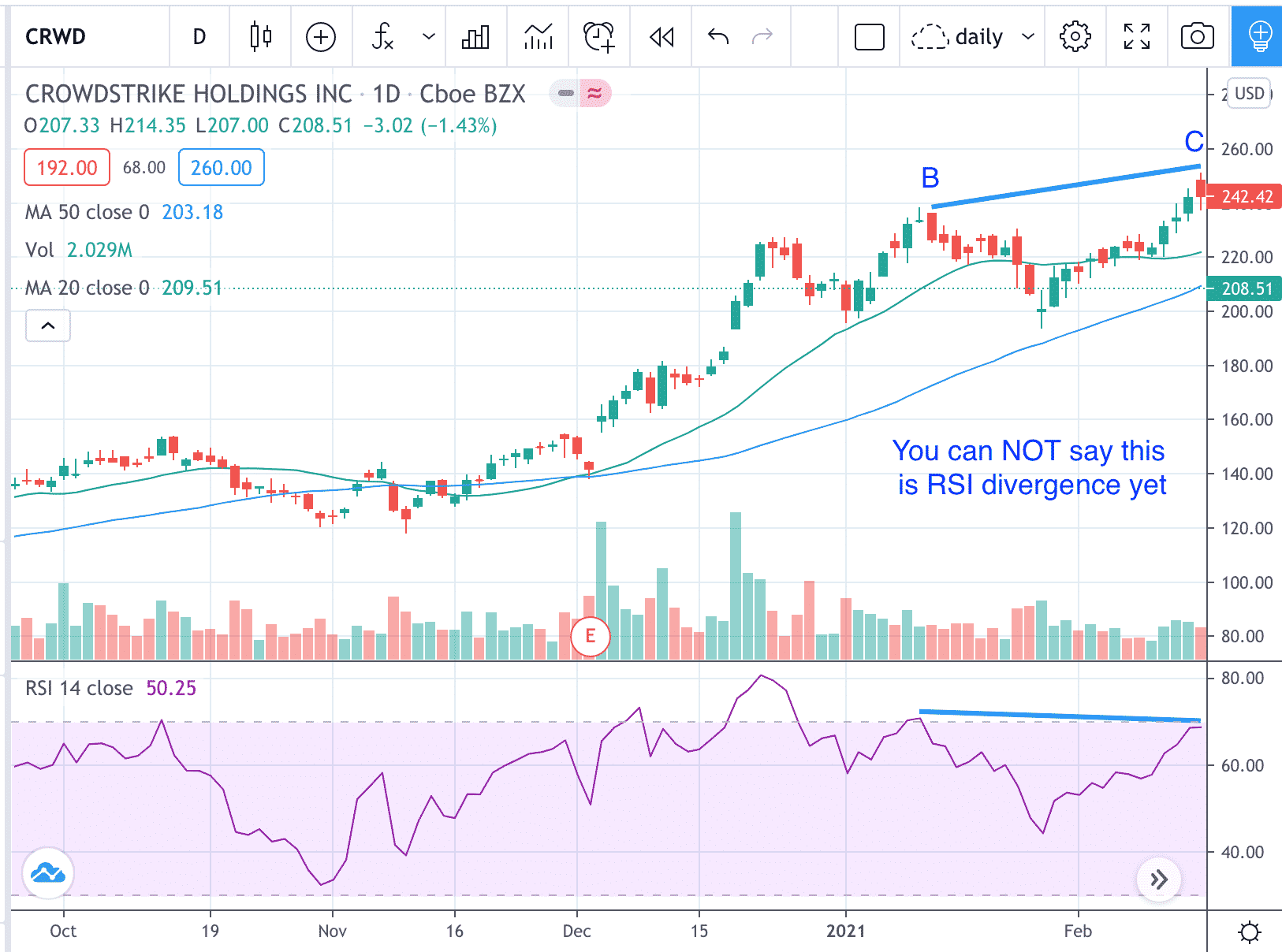 Can we say there is a second RSI divergence?

Although C is higher than B, it is not a confirmed peak.

Wait a day or two if we get one a couple of candles down before confirming that C is a peak. 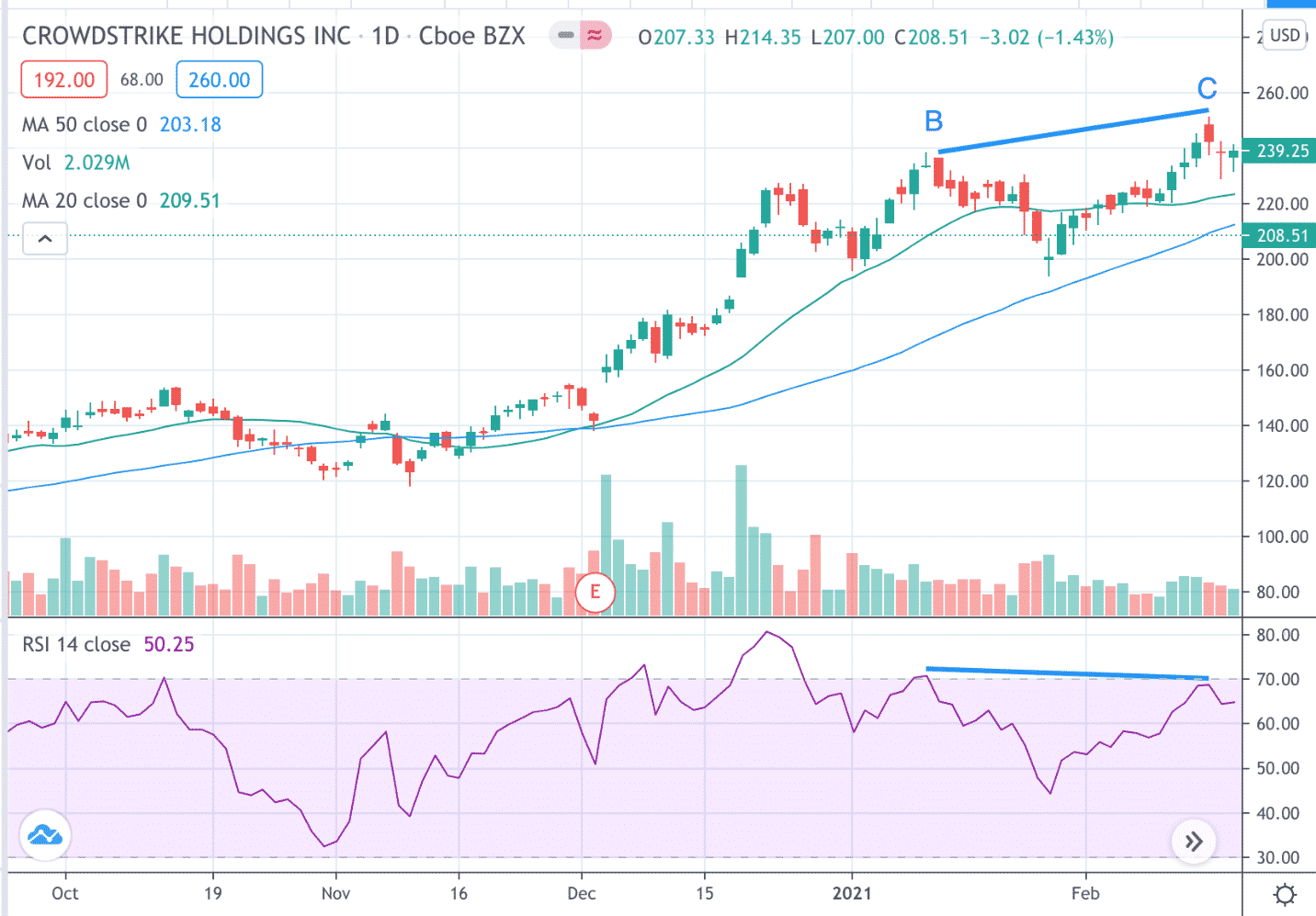 And it was at this peak that the RSI also peaked.

But the top of the RSI is lower than its previous RSI top.

It is a confirmed RSI divergence.

Going too short again here would have worked out fine. 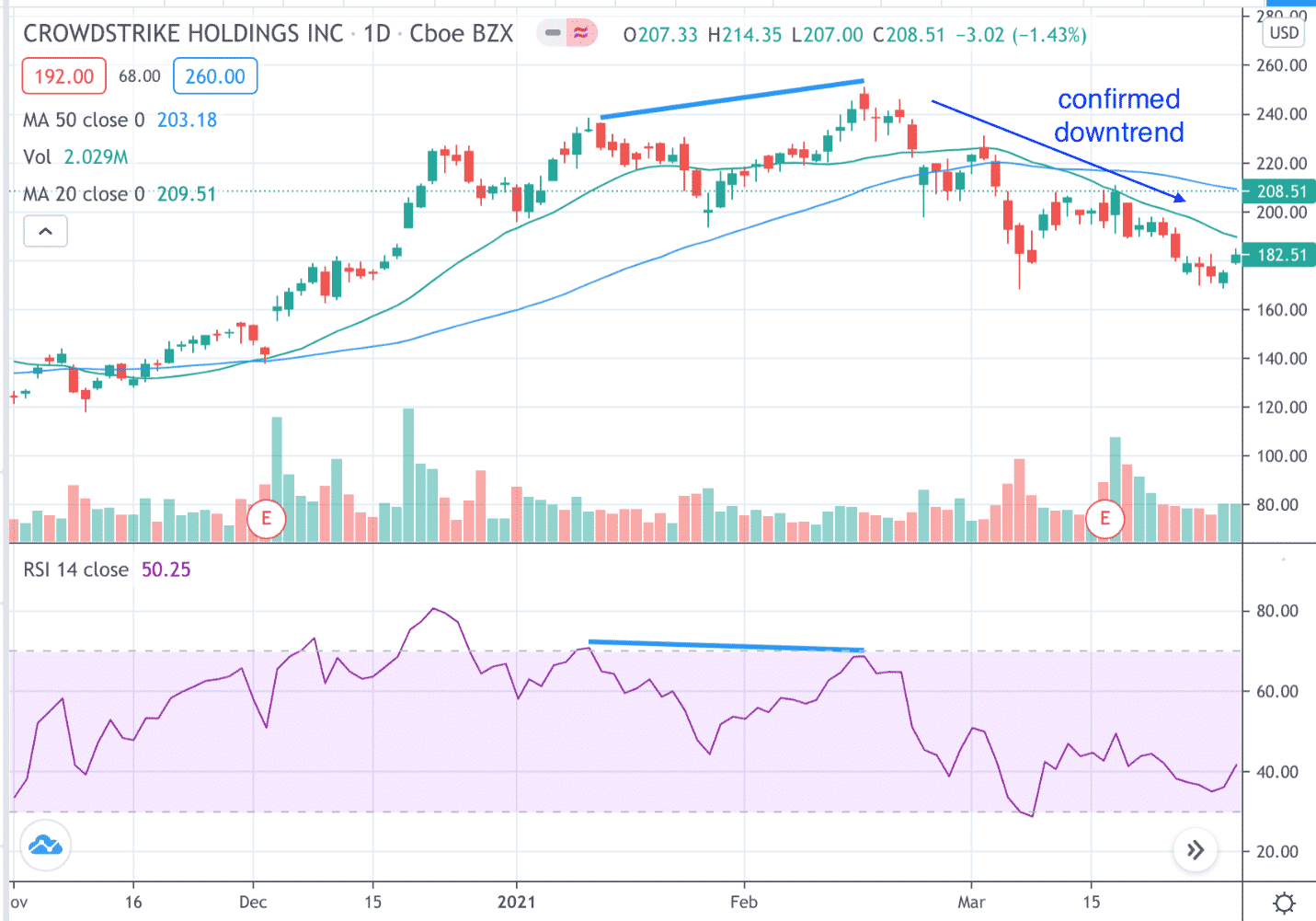 CRWD is now in a confirmed downtrend with lower highs and lower lows.

Do you see another RSI divergence?

Price hits a lower low (as it should be in a downtrend). 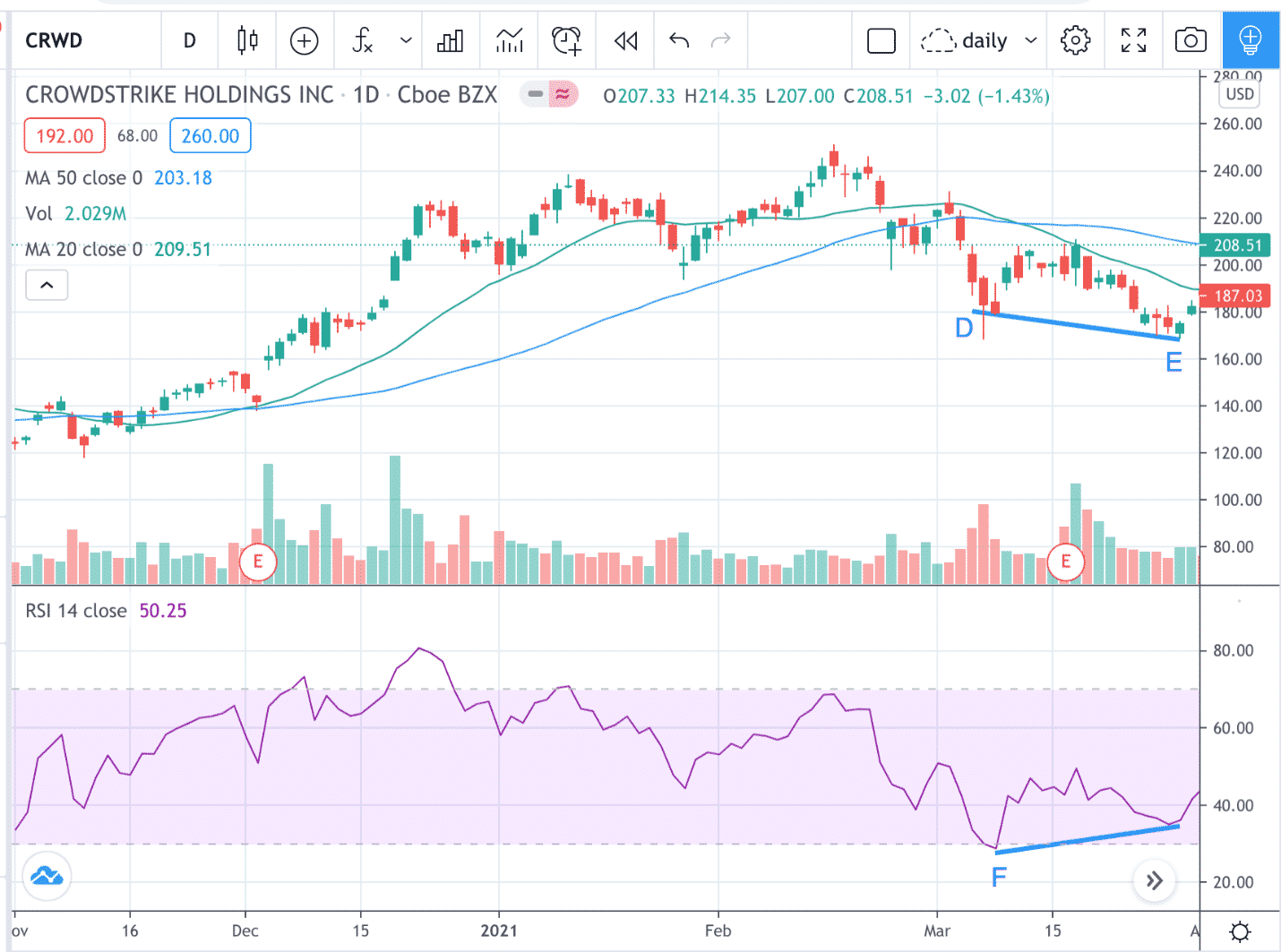 However, the corresponding valley of the RSI does not make a lower low.

It is not Confirmation of the price movement. In fact, the RSI is making a higher low rather than a lower low. This moves against the price.

The downtrend is slowing down and losing momentum.

It would have been good to go up for a long time with the green candle on the right edge of the chart. 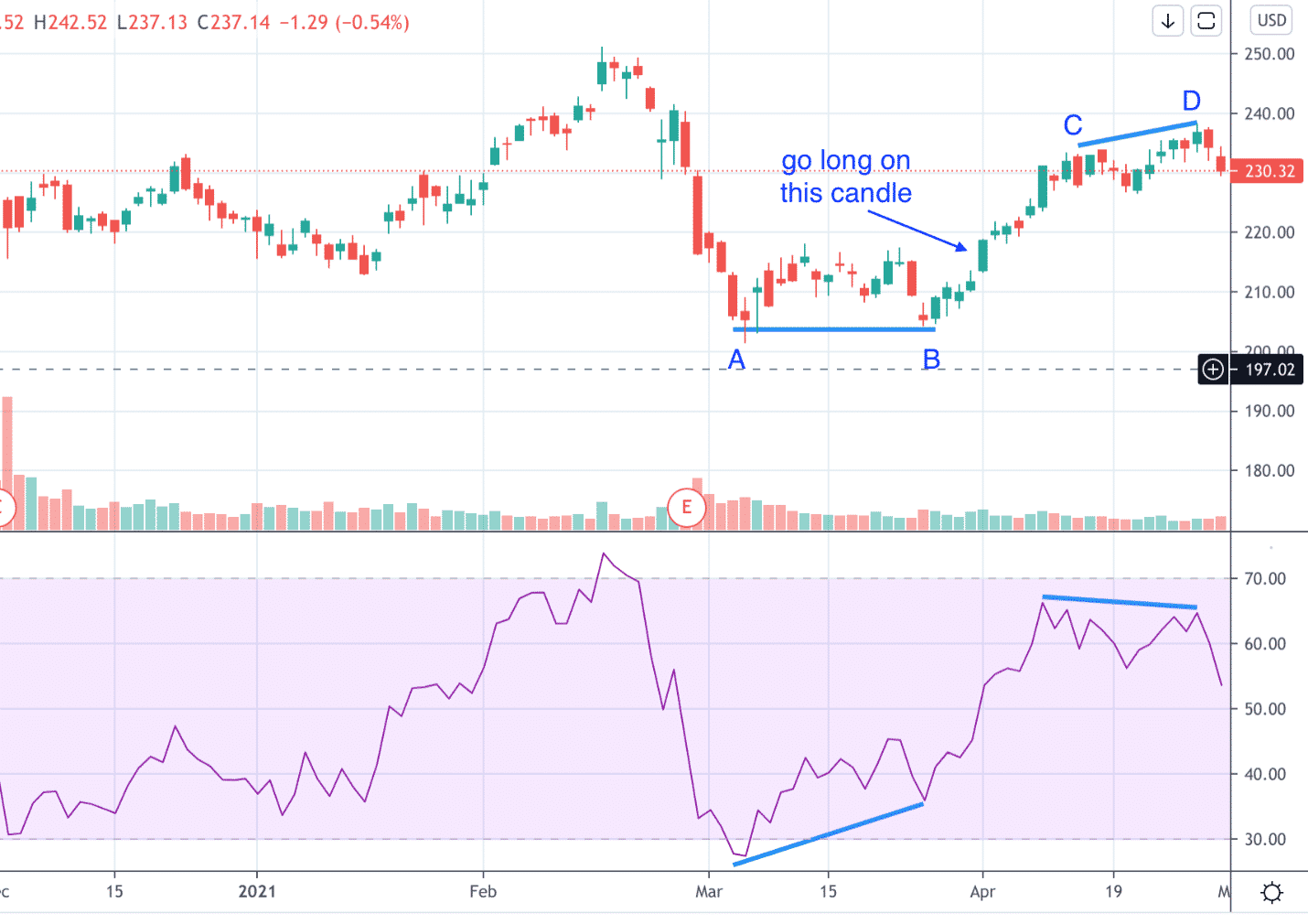 However, the corresponding troughs in the RSI show an upward trend. RSI is showing divergence and showing a valley in an oversold state.

The bullish green candle that broke the top of the W double bottom would be a good place for an investor to go long.

The price rebounded and later produced a higher price high – points C and D. However, the RSI hit a lower high.

Another deviation. If the investor had not left the long position, this would be a good time to leave that long position.

In the next example, Walgreens (WBA) makes a higher high at point B, where it a Pointed tail candle with long upper wick.

This wick indicates the rejection of prices along the wick. 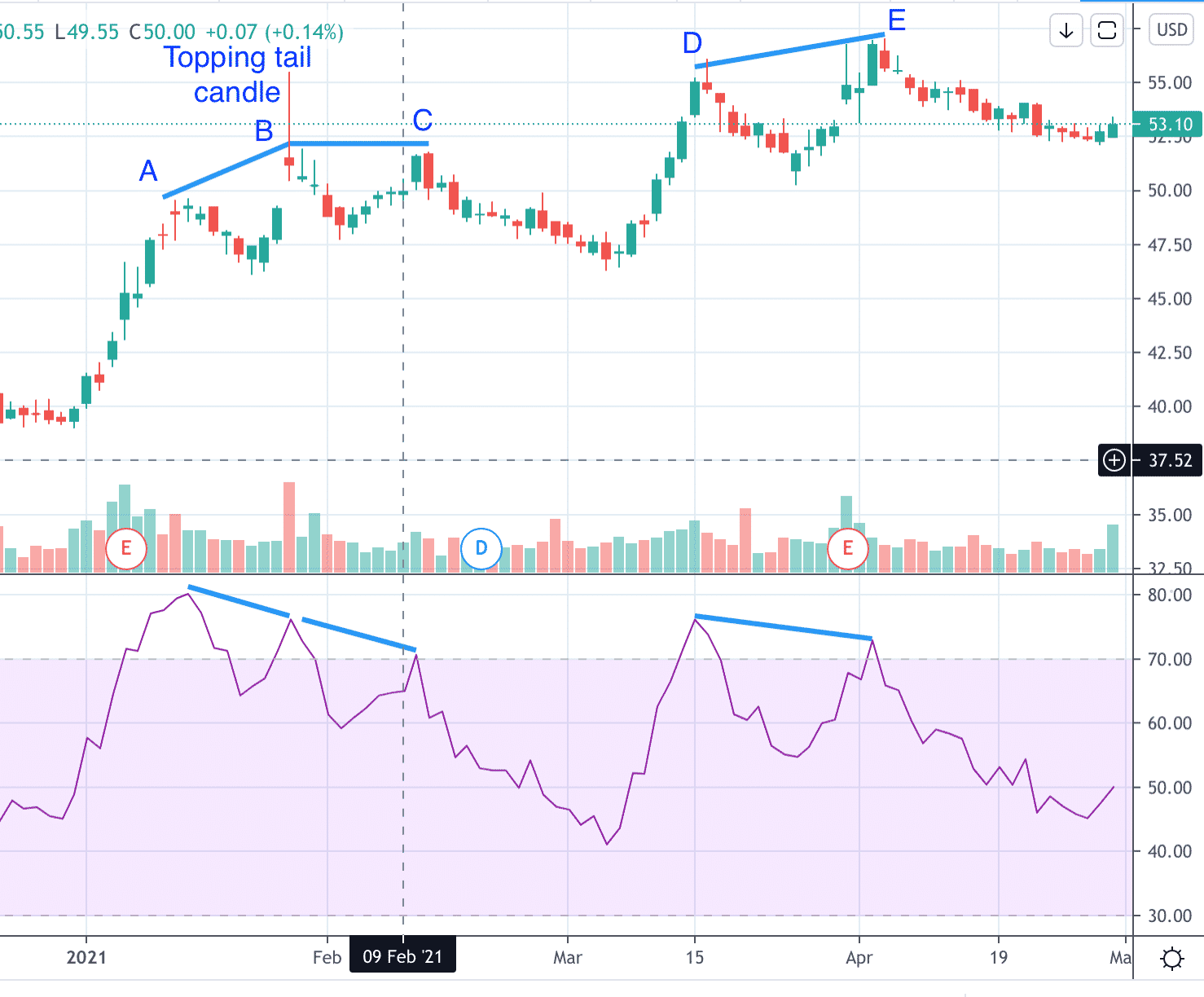 The RSI is not making a higher high and is therefore showing a divergence.

The investor would make a calculated bet that the price would not go above $ 56 and would have a. can put Spread the bear call.

In fact, the price can’t go above $ 56 for at least another month and a half.

At point C, the price could not exceed the previous closing high.

It just made an “equal high”. But the RSI is making a lower high.

This offers an investor another chance to make a bear call.

This makes three clues that suggest the price of WBA is going down.

The more patterns you have in alignment, the better.

Incidentally, points D and E show another RSI divergence, which suggests downward pressure on the price.

No it does not.

Here is the Dollar Index ETF (UUP) showing an RSI divergence at points A and B, suggesting that the price should reverse after point B. 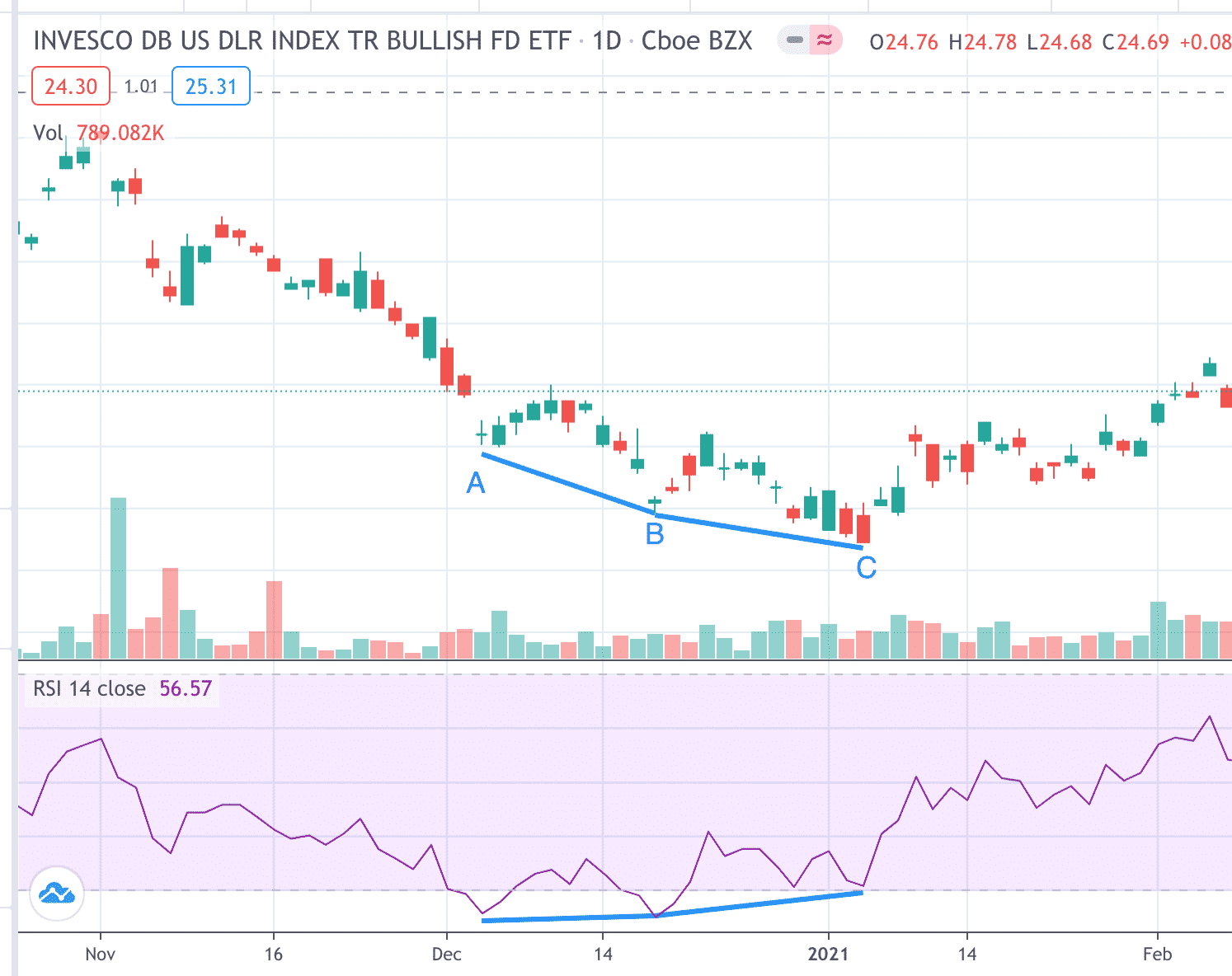 Points B and C show another RSI divergence.

Now we have a three point divergence.

The valleys of A, B, C on the price chart always form a lower low.

But the corresponding points on the RSI indicator continue to make higher highs.

These are usually higher predictors of price reversals than two-point divergences.

After point C, the price was reversed.

If an RSI divergence is detected in the oversold or overbought territory, there is a possibility of price reversal.

When an investor with appropriate stops and targets makes a directional bet towards reversal, the gains are usually greater than the losses. 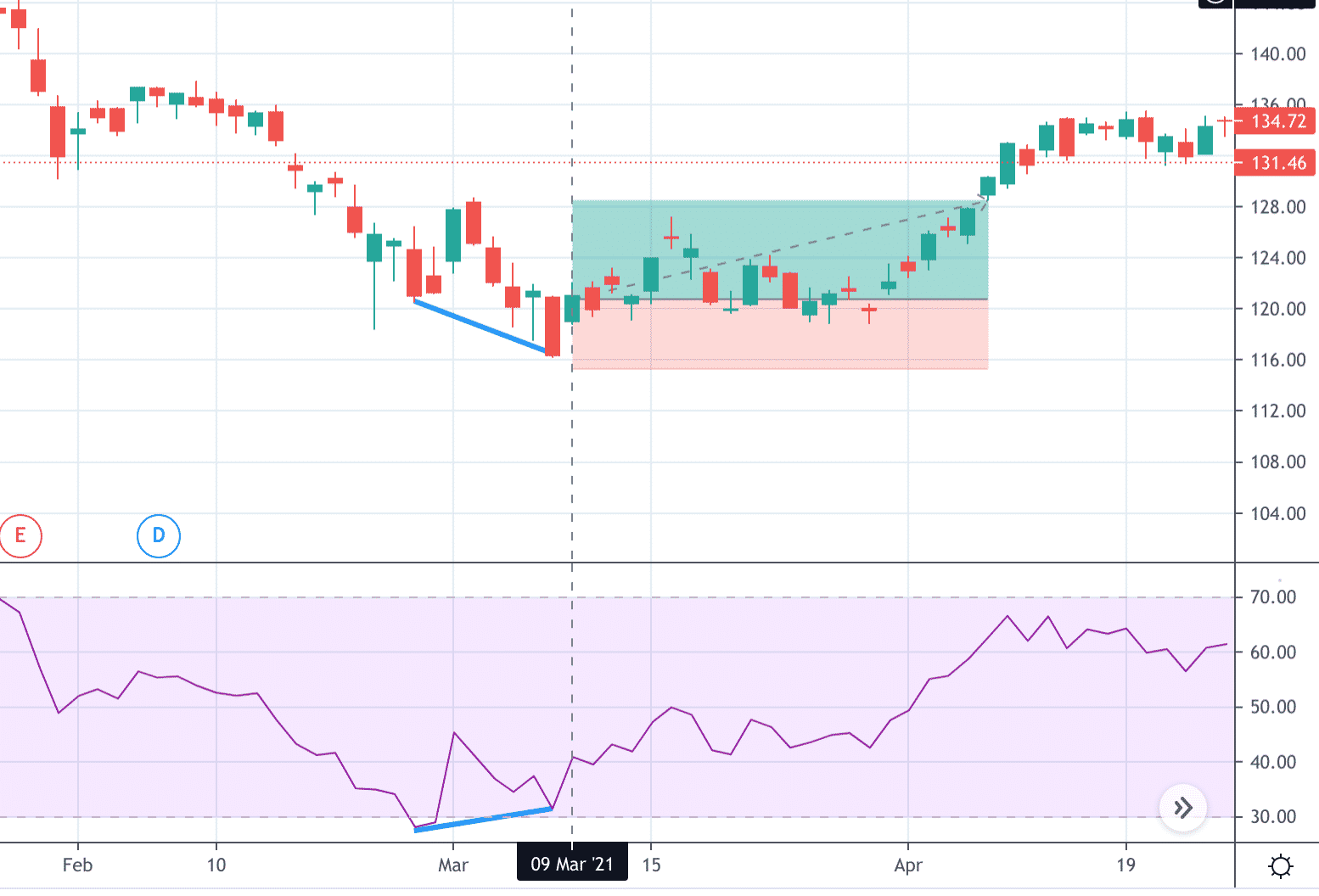 While stocks are capital-intensive to use, an options investor can do the same trade with one Bull call spread as follows: 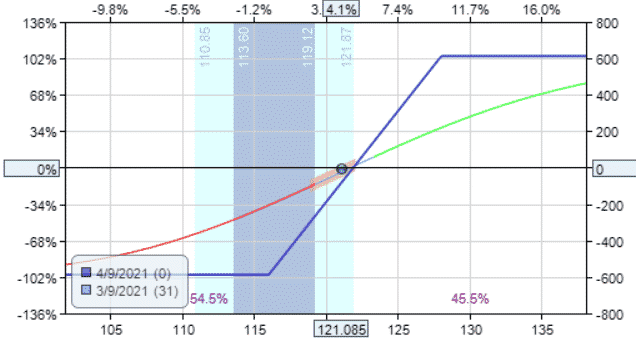 Note that the options investor selected the strikes at the same price as the stock investor’s target and stop loss prices.

Based on the price action with stop and targets as before, the options investor takes profit on April 8th by closing it out as follows:

While the profit taken is less, the options investor has used much less capital.

When price is in an uptrend and the RSI is overbought, draw a trend line connecting the price spikes.

Then see if the RSI contradicts this trend or not.

When price is in a downtrend and the RSI is oversold, draw a trend line connecting the troughs.

Then see if the RSI contradicts this trend or not.

If the RSI is deviating from the price, it suggests that the price may reverse the trend, or at least the trend is slowing.

The RSI divergence is a reversal pattern.

It has more validity and weight when the price is on a trend.

Don’t give it a lot of meaning when you see an RSI divergence on a sideways price chart.