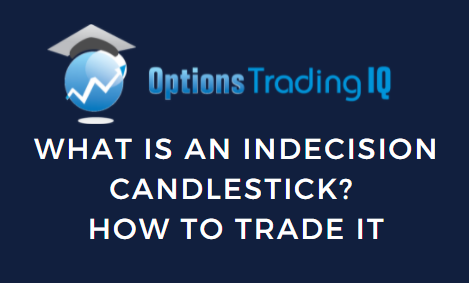 Today we’re looking at the indecision candlestick. We’re going to look at what they mean and how to trade them. Let’s begin.

Markets aren’t always trending. Periods of equilibrium between bears and bulls are a common phenomenon that causes financial instruments to battle for direction.

The disorientation in Price action signals a fierce battle between market participants resulting in unique candlesticks.

Indecisive candlesticks are usually the result of an intense battle between buyers and sellers trying to drive the price down in every direction.

The patterns that emerge due to candlestick indecision can provide clues as to the direction that price is likely to move in the long run.

The small bodies and wicks indicate that buyers have tried to drive the price up but have encountered strong resistance from sellers. 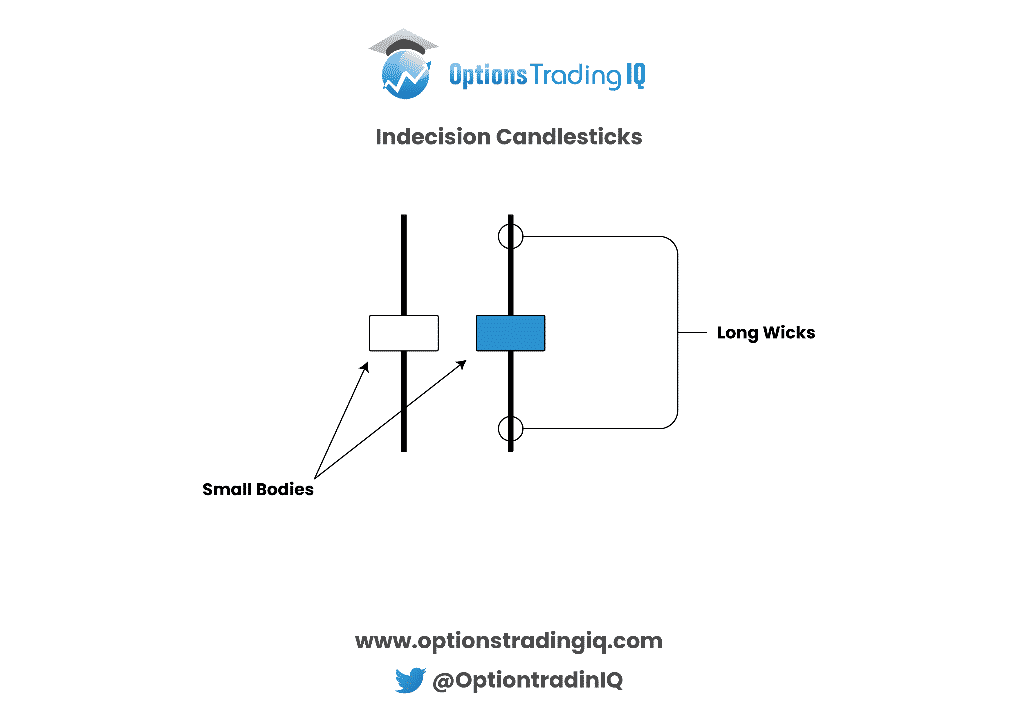 The long wicks on either side signaled that the price was moving both up and down during the trading session, but encountered strong resistance.

The market struggling to maintain either higher or lower prices amounts to indecision.

When the price of a security is in a downtrend, there may be a point where buyers feel that the price has come down significantly, likely into the oversold area.

In this case, you can start entering the market, Bet the price will reverse.

Placing buy orders when prices are falling often leads to a significant reduction in the downward momentum.

In most cases, sellers fight back by trying to prevent a price correction.

The result is usually a stalemate between buyers and sellers, which leads to that increased volatility.

The lack of an absolute winner leads to the price opening and closing near the opening point.

The emerging indecision candles signal the imbalance, which causes the price to fall into a range.

An imbalance occurs only when the buyer or seller builds enough momentum to push the price in one direction.

Indecision candles indicate that the buyer and seller are active in a trading session.

Given the balance between buy and sell orders, prices often open and close at the same level.

In the midst of indecision, the patterns that emerge can be used to predict likely course direction. 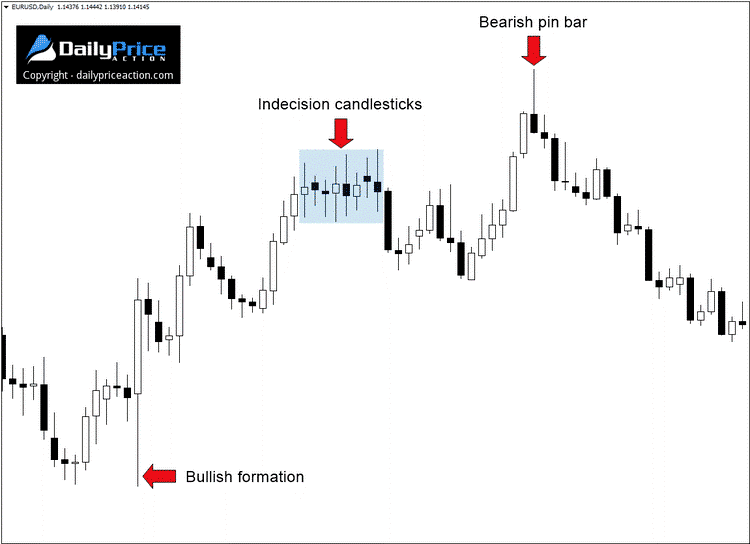 In the graphic above is the EUR USD was in an uptrend until indecision in the market resulted in price movement in a range.

The above chart clearly shows candles with small bodies and relatively long wicks in both directions.

The indecision candlesticks are a common phenomenon at the highs and lows of long-running trends.

The candles form when the price hits support or resistance levels, causing a fierce battle between buyers and sellers.

The candlesticks also form when new orders flood the market on both the buy and sell sides, creating an equilibrium in both directions.

The high volume of orders from buyers and sellers leads to large sums of money exchanging hands, which creates indecisive candle structures.

The stalemate between buyers and sellers often results in the price staying in the range as no force has the momentum to push the price in any particular direction.

Typically, the longer the consolidation, the stronger the breakouts once the buyer or seller wins the battle

If such candlesticks appear while the price is trending in a certain direction, it could indicate that Momentum faded. 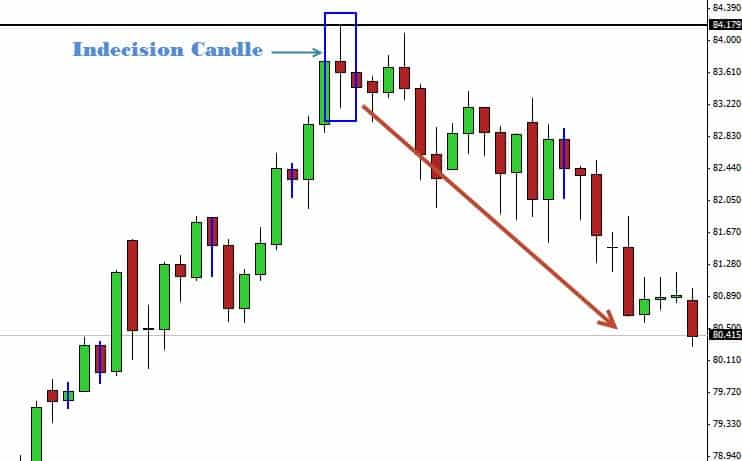 Look at the above chart where price trended up until an indecision candle appeared at the top.

The indecision candle confirms that buyers are losing momentum and sellers are increasingly coming into play.

The indecision suggests an intense battle between buyers who tried to raise the price but failed. Sellers also tried to cut prices, but also failed.

The result was the price close near the opening point.

The second candlestick, after the indecision candlestick, only went to confirm that sellers are picking up steam and that a reversal is at play.

After that, the sellers won the battle and consequently pushed the price down.

While indecision candlesticks signal potential reversals whenever they occur, they can also signal trend continuation.

Since indecision candlesticks represent indecisive price behavior that stops price movement, once the certainty returns, the outcome could cause the price to move in the direction of the underlying trend. 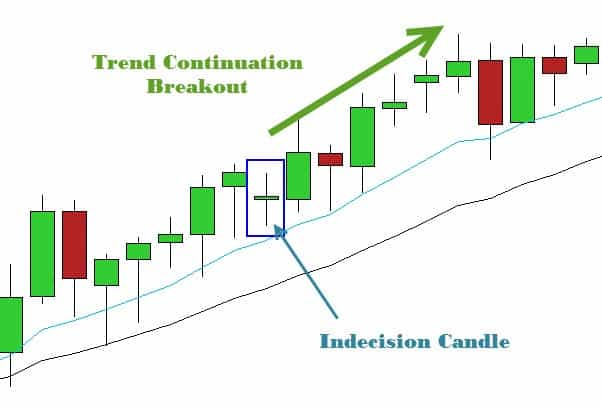 The above chart shows an indecisive candle that appeared in the middle of an uptrend. Buyers and sellers fought for direction.

In the end, buyers won, causing the price to resume the uptrend.

Indecisive spinning patterns form at the top of an uptrend or at the bottom of a downtrend.

Whenever such patterns come into play, they lead to a battle between buyers and sellers, with neither being able to push the price up or down. 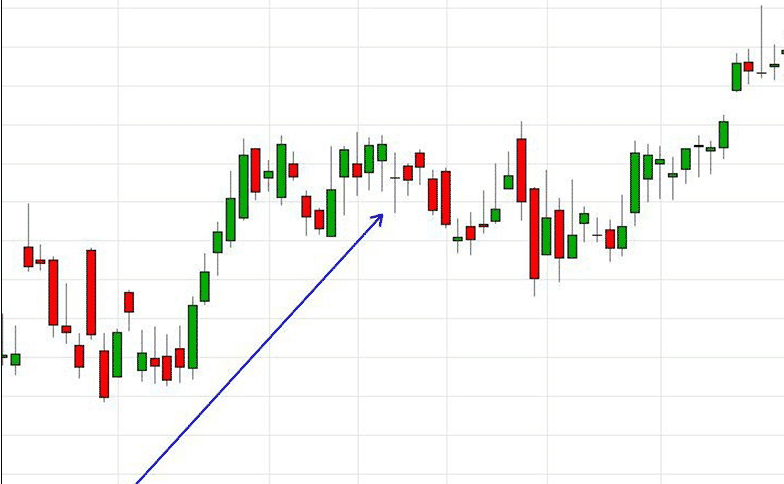 The graph above shows that prices resorted to trading in a range and oscillated up and down with no clear direction.

The tiered market lasted for some time before buyers overwhelmed sellers and drove up prices.

Given the indecision, it will be extremely difficult to predict which direction price will go when consolidation comes to a standstill.

Indecision candlesticks occur during times of equilibrium between buyers and sellers.

While the two are struggling to push the price either way, candles with small bodies and long wicks appear.

The appearance of these candlesticks signals indecision in the market as prices have difficulty moving in either direction.

The equilibrium between buyers and sellers causes price to move in a range until an imbalance occurs, forcing price to reverse or move in the direction of the underlying trend.