I once told the story of Ronald Read, who died in 2014 at the age of 92 with a dividend portfolio worth $ 8 million. This story shows that Ronald Read earned nearly $ 20,000 in monthly dividend income from this diversified portfolio of 95 blue chip stocks. It looked like Mr. Read invested solely for dividend income, and his portfolio was well put together.

I was confused by some of the feedback, mostly because of his frugal lifestyle. Many people asked me if he was really enjoying his life.

But what they really didn’t understand is the power to invest small amounts consistently and then let that money stack up over long periods of time. This is how wealth is built up on the stock exchange.

The problem with long-term investing is that asset balances and dividend income will be greatest at the end of our journey. If you put money together over a long period of time, most of the gains will be visible after 40-50-60 years. That would be the case even if your savings rate was 10-20%, which is by no means extreme.

Let’s start with the basics

$ 1 invested 10% today becomes $ 1.10 in one year and $ 1.21 in two years. The additional cent in the second year is due to the compounding of interest. If you had never added that dollar together, you’d just stack 10 cents a year. When you reinvest, you end up making profits on top of the profits, creating a positive cycle of wealth.

Compounding is a powerful force, especially if you get a good return on investment and keep the snowball rolling for a long period of time. However, most of the results will be visible at the end of the trip.

The initial grind is always the hardest, because the fruits of compounding are very small right away. The same dollar invested at 10% / year doesn’t double until year 7. Yet the mind will make you believe that waiting 7 long years for a measly dollar was not worth it. Many people lose hope in the early stages of compounding. This is compounded by the fact that returns do not reach a stable and predictable 10% / year. To make 10% a year in stocks you would have to endure long drawdowns, recessions, and unemployment, and only those patient enough to stick with their plan and stick it out can enjoy the power of compounding to their advantage.

It’s even more interesting to see the interplay between savings rates, stock returns, and the achievement of your goals. The perspective of running the numbers and looking at different scenarios definitely helps us see things clearly.

With this saving, our investor is spending $ 4,000 / month. If our portfolio had an average dividend yield of 3%, it would take nearly $ 1.60 million to generate $ 48,000 in annual dividend income. It would take nearly 27 years to achieve financial independence at this rate of savings.

Why am I telling you all this common sense?

This is because every time I tell a story about someone who had a lot of money in their old age, people always say, “I hope he / she enjoyed his / her money”.

When most people think of $ 1 million they imagine how they’re going to spend it all. These are the people who live from paycheck to paycheck and rarely get ahead financially. Another problem with these questions is assigning what is important to another as a measure of what should be important to them. This is a very arbitrary measure of “success”.

These comments show that the person who created them doesn’t understand the power of compounding and the fact that most of the visible gains become visible at the end of a person’s life.

For example, Ronald Read died in 2014 at the age of 90 with an estate of $ 8 million. The same estate could have been worth $ 4 million in 2007 or $ 2 million in 2000. Most of the gains from this portfolio likely came after he retired with a reasonable amount. It is very likely that he did not become a millionaire in the early 90s, even before he was 70.

Let’s say Ronald Read had $ 8 million in his stock portfolio in 2014, and he has only reinvested dividends and not added a single dollar for the past 25 years. This means that its value was nearly $ 900,000 in 1990. While this is still an above average amount, it is not as overwhelming as $ 8 million. Given that he is likely to keep adding money to his portfolio, his net worth may have been even lower in 1990.

According to the rule of 72, if I had an annual return of 10%, my money would double roughly every 7 years. The following table illustrates this simple concept: 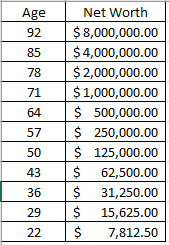 Due to the nature of compounding, Ronald Read has most likely made 90% of his net worth by the time he turned 70.

I like to research different stories and viewpoints and then try to draw the best lessons that apply to my situation. Ultimately, you are successful when you do something that you enjoy.

– The most successful dividend investors of all time
– The importance of investing for retirement as early as possible
– Dow 370,000 Thu
– Warren Buffett’s $ 8 billion mistake