The shares of Yeti Holdings Inc (NYSE: YETI) fell 0.4% to $ 94.61 this afternoon after hitting a new all-time high of $ 95.66 at the start of the session. The security tore the charts up 165.5% year-over-year, aided by the 120-day moving average, which saw at least two setbacks in March. In addition, the stock is sending out a historic bullish signal that could push it higher in the coming weeks.

In particular, the stock’s recent high sits amid historically low implied volatility (IV), which has historically been a bullish combination for Yeti stock. According to data from Schaeffers Senior Quantitative Analyst Rocky White, the stock has traded four times within 2% of its 52-week high in the past five years, while its Schaeffers Volatility Index (SVI) is 20 of its annual range or lower. This is currently the case with YETI’s 38% SVI, which is in the 1st percentile of its 12 month range.

White’s data shows that a month after these signals, the stock was higher 75% of the time, an average return of 12.8% for that period. From its current position, a move of similar magnitude would push YETI to a brand new all-time high of $ 106.72. 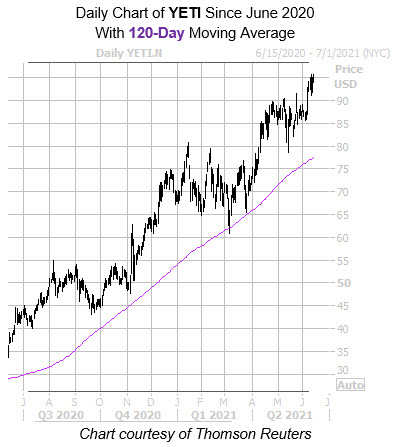 The stock also appears ripe for a short squeeze that would propel the stock higher. While short rates have declined 4.3% in recent reporting periods, the 6.18 million stocks sold short still account for 7.6% of the stock’s available float, which equates to pent-up purchasing power over four days.

Moving the option boxes could create additional tailwind for security. This corresponds to the 50-day put / call volume ratio of Yeti shares on the International Securities Exchange (ISE), the Cboe Options Exchange (CBOE) and the NASDAQ OMX PHLX (PHLX), which is in the 93rd percentile of their annual range. This indicates that long puts are being picked up faster than usual.

Ultimately, the security’s Schaeffer’s Volatility Scorecard (SVS) ranks 83 out of 100, meaning the stock tends to exceed those volatility expectations – a boon for option buyers.