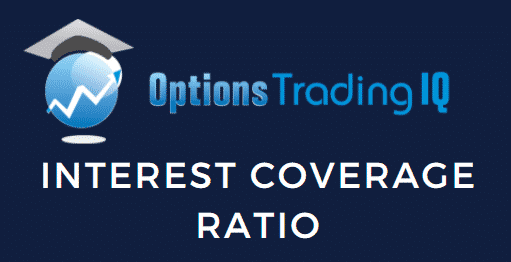 In the series of fundamental analyzes, we will now look at the interest coverage ratio, what it is and how it can be useful in valuing an investment.

Here we can simply break it down into every single word:

In this case, we are comparing a company’s profits to its ability to pay the interest on its debt.

There are several ways to look at a company’s profits, and each way of course affects the outcome of the ratio calculation.

Taxes are often an important financial factor when assessing a company’s financial picture, i.e. when looking at profits after this Taxes can provide a “clearer”, if more rigorous, view of a company’s actual profits.

Since the number literally indicates how often the income is higher than the interest, this ratio is sometimes referred to as the Times Interest Earned (TIE) ratio.

In most cases the ratio is calculated over a rolling year, but it can be calculated in any timeframe as long as both the income used in the calculation and the interest are for the same period.

Quite simply, it shows you how likely it is that a company will be able to service its debts, particularly in the short term.

Ratios less than 1 mean the company isn’t making enough to just pay the interest on its debt, which should be a big red flag.

Typically, lenders (and investors) want to see a quota greater than 1.5 before considering the company “safe” for lending (or investing in).

However, as with the debt-to-equity ratio, different industries may have different standards, and what is “safe” in one industry may not be “safe” in another.

Industries that are more prone to greater fluctuations, with either the economy or the workforce, may need a larger ratio before they are considered stable.

It is important to note that, in general, the ratio can and will change over time.

It is just a snapshot of a company’s financial picture at a given point in time.

That is, just because you see a current interest coverage ratio of 1.6, for example, doesn’t necessarily mean there is cause for concern.

Likewise, a current ratio of 7 can look like a very comfortable number so there is nothing to worry about.

However, if the former company’s quota was 0.9 and the latter’s quota was 10 last quarter, one might very well change their minds about the two companies.

Therefore, instead of relying on a single calculation of the Interest Coverage Ratio for the most recent period, investors should do well to look at the interest rate over time.

For example, by looking at the rate for each quarter over the past five years, an investor or analyst can spot trends (either good or bad) that a single calculation would not provide.

Falling rates can indicate that a company may have trouble paying its debts in the future.

While maintaining a steady increase in this rate is difficult, maintaining a high rate over time is generally a good sign that the company is in good control of its debt.

This may mean that even if the company is otherwise rated “high”, it is in a good position to continue servicing that debt, and is likely to continue to do so in the future.

Note, however, that there are no guarantees for the future.

Interest coverage is a metric that can be used to determine whether a company is able to service its debt in the short term.

When comparing companies, however, one should stay in the same industry and ideally only compare companies with similar business models and sales, as these can influence the ratio and make it more difficult to decide which is “better”.

Also, be aware that this ratio can fluctuate over time, so the most recent ratio may not be sufficient to determine trends or a company’s potential development.