Stocks continued to march higher into July expiration, as the Nasdaq 100 Index (NDX – 14,826.09) closed higher for the eighth-straight week, making it the seventh time this has happened since 2000. A consolidation phase or pullback immediately followed 71.4% of the time, but even when it remained positive, stocks typically stumbled within the next two months.

This is just one of the many things telling me this rally is getting near the later innings in terms of short- to intermediate-term trends. And while any good trader knows you can’t fight price action, it is only prudent to highlight these concerns, so that we are ready to make moves if price action deteriorates before market internals and sentiment readings turn around in the bull’s favor. 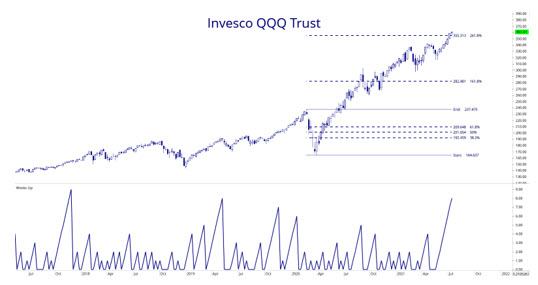 Earlier this week, I highlighted on Twitter that the Invesco QQQ Trust Series (QQQ – 361.01) broke above the 261.8% Fibonacci extension level from the pre-pandemic highs to the pandemic selloff lows. At both the 100% retracement and the 161.8% extension levels, we saw prices exceed the level only to stumble for a few months shortly afterwards. I expect the 261.8% level will act similarly and be an important pivot point.

While both the S&P 500 Index (SPX – 4,369.55) and Nasdaq Composite (IXIC – 14,701.92) closed at new weekly highs, these market indices are being pushed upwards from an increasingly narrow breadth. Only a few things can happen in these situations: Either prices fall, consolidate, or breadth catches up. Divergences can last quite a while, but they cannot go on forever, and markets eventually revert to the mean one way or another. Our job as traders is to know what to look for, and how to react accordingly. 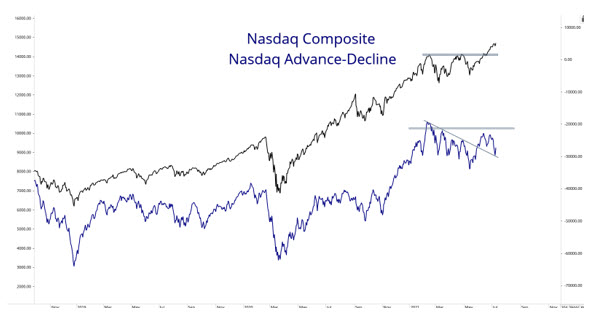 The first breadth concern that I see is that the percentage of S&P 500 stocks that are above the 50-day moving average remains low, with only 56.11% of stocks in the index trading above it. In fact, it has remained low since rolling over from the most recent high in April. This is eerily similar to the type of price action we saw in 2015, before the market entered a two-year consolidation phase.

What has me most concerned, though, is that neither the New York Stock Exchange (NYSE) nor the Nasdaq’s Advance-Decline Lines (ADL) have broken out. While the Nasdaq ADL was able to break out of a downtrend that helped propel the index to test resistance, it did not follow through and break out like the index. This is also similar to what we saw in 2015, before equity markets went sideways and frustrated bulls for the next two years.

Additional evidence that we are experiencing breadth issues that could trip up equities is the S&P 500 Equal-Weight / S & P 500 relative ratio chart. It has now rolled over from the June peak, where it found resistance around the 2013 and 2019 lows. And while many will point out that we had a prolonged period from 2016 to pre-pandemic 2020 where mega-caps and large-caps (predominantly tech stocks) led the markets higher, that is not typical. Throughout history, you need participation from the majority of stocks for rallies to persist.

Second retest for the Consumer Discretionary breakout this morning. Keep a steady eye on sector breakouts and if they hold or if they fail. $ XLY pic.twitter.com/FJXWIMPOnV

On a positive note, though, we’ve seen multiple sectors and industry breakouts. As I’ve been highlighting on Twitter lately, we want to watch these breakouts closely. Sectors or industries that hold these levels, if we simply enter a consolidation phase, will very likely be the market leaders going forward. However, failures at these levels can lead to fast moves to the downside.

“… With the Cboe Volatility Index (VIX – 15.62) coming into a new week and quarter around 15 – which was its reading ahead of the early 2020 Covid-19 sharp selloff, and a level from which it has bounced in recent months – a hedge of long positions to protect against mid-summer and / or late-summer surprises could be appropriate. “

As we mentioned a few weeks ago, the Cboe Volatility Index (VIX – 16.80) had the potential to bounce around 15, which was the reading ahead of the 2020 pandemic selloff. The VIX spot surged on Thursday to a high of 21.29, as stocks sold off only to find resistance near the 2020 and early 2021 low levels, as it did throughout the second quarter this year. I suspect a sustained move above those levels will also come with a change in market behavior as we head into a more volatile part of the summer. 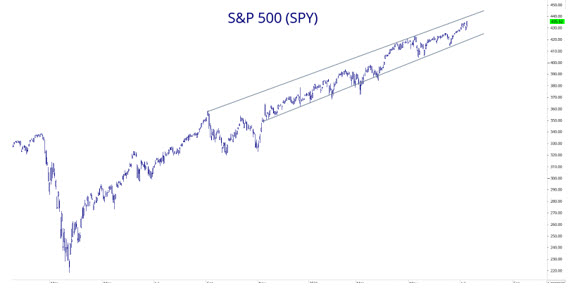 “In a week’s time, the SPX was teetering on a deteriorating technical backdrop, then rallied to take out various potential resistance levels, most notably its early May, all-time closing high. As I said a few weeks ago, if the SPX spends most of its time within the upward channel that began to take shape at the same time positive Covid-19 headlines were emerging, it would be considered a win for bulls, since support and resistance levels that make up this channel move higher with each passing day . “

As we move into expiration week, it would be irresponsible not to look at open interest configurations. When looking at the SPDR S&P 500 ETF Trust (SPY – 435.52) we have peak call at the 440 strike, and peak put at the 420 strike to start the week. I reckon the market will likely be stuck in this range throughout the week, as this configuration also aligns well with the price channel it has been trading in throughout 2021, which we’ve highlighted numerous times before. If for some odd reason we were to break the 420-strike, it could see a swift move lower to the 405-strike or even 400-strike, but the probability of that happening is low. And while the QQQ doesn’t have a significant peak call level to act as resistance, it does have a massive peak put level at the 340 strike level that should act as support.

As for why I think we will stay range bound, over the past 10 years the S&P 500 has been positive in July 90% of the time, with mid-July being one of the best performing two-week periods for the index. Furthermore, over the past 20 years July has been positive 70% of the time, and the two mid-July, two-week periods on average have traded sideways. 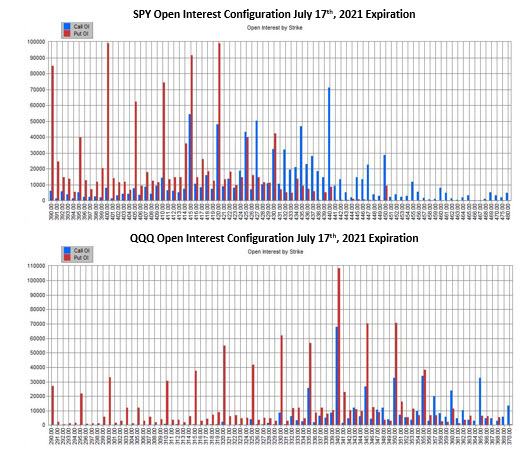 Much like breadth, sentiment readings tell us that market participants are overly optimistic. The NDX buy-to-open put / call volume ratio just put in a seven-year low last week at 0.354, which was the lowest reading since July 8, 2014. What this is telling us is that we are in a higher-risk environment, as we are prone to a pullback. What people often fail to understand when looking at put / call levels is that we usually want to see a confluence of changes before making bearish bets outright. Two things we are looking for in particular is a rotation upwards from an absolute low, and a subsequent technical level breakdown in broad indices. 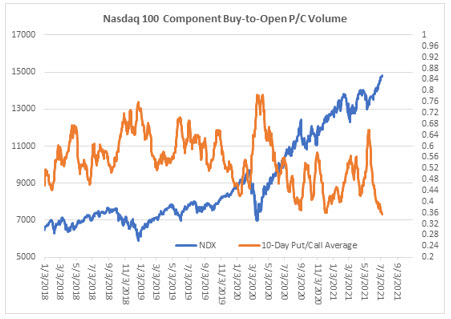 As I have outlined, many factors are telling us we are possibly near the end of the current rally in stocks on a short-to-intermediate-term basis. Market participants should take this opportunity to sell any overweight positions into OPEX and pair back their market exposure as risk levels continue to rise. Alternatively, you can hedge or choose to replace long stock positions with call positions to reduce your overall dollar exposure to the market.