Microsoft (MSFT) is a dividend provider that has managed to grow dividends on a regular basis since introducing a dividend in 2003.

The company’s founder is Bill Gates, who started it with Paul Allen in 1975. The company grew by leaps and bounds and was finally floated on the stock exchange in 1986.

Bill Gates is of course a major philanthropist, which is why he has gradually reduced his stake in the Seattle-based software company. He has also diversified his fortune away from Microsoft over the past 35 years.

At the time Microsoft went public, Bill Gates owned 11,222,000 shares, which according to the prospectus corresponded to 49% of the shares. 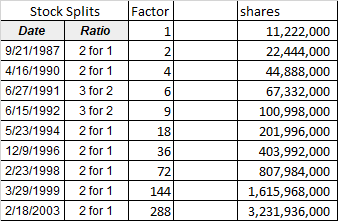 These are huge numbers and just illustrate the power of compound interest and the power to identify and hold onto a great company early on. Not every company does that so well. Microsoft has seen some ups and downs over the course of its history.

I just find it fascinating that Bill Gates would have been richer than most of the people out there.

But of course Bill Gates recognized that building wealth is not so important as making a difference with all that wealth. At the end of the day, making a real difference in the world is far more important to your legacy than becoming the first trillionaire.

Unfortunately, in Mr. Gates’ divorce proceeding, it can be more difficult to gauge future dividend income from his Microsoft stock. It is likely that it will be reduced in the future.